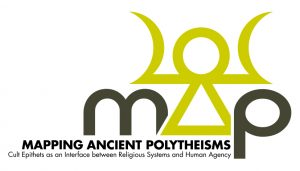 As Principal Investigator of the project, Corinne Bonnet, Professor of Ancient Greek History, leads a team of specialists in ancient religions, spatialisation, and digital humanities (especially web mapping and databases). The project should appeal / is aimed not only to the academic world / scholars but also to the general audience interested in understanding how ancient religions worked.

Naming the gods: what is at stake?

The MAP project deals with the way ancient societies named their gods. The main investigation is about how ancient people, using variable appellatives in variable combinations, conceived and shaped complex and fluid divine powers.

Previous understanding of gods as singular or personified beings appears to be simplistic and does not allow to consider the structural and dynamic complexity of Ancient religious systems. What is at stake now is to analyse networks of multifaceted divine powers and their environments. 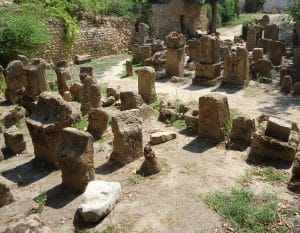 To understand divine powers and their relational links/logics, the MAP project takes into account “onomastic sequences”, that is to say combinations of various types of divine names or elements (nouns, epithets, titles, sentences, etc.). Some of which being specific and others being shared by different gods and goddesses. By targeting one or several relevant (?) divine interlocutors, these onomastic elements play a strategic role in ritual communication, in a given ritual context.

A comparatist project between Greek and Semitic worlds

The MAP project approaches the Greek and West-Semitic worlds by a comparatist method, on a long-term scale (ca. 1000 BCE – 400 CE). In a truly Mediterranean dimension, MAP includes several polytheisms and a monotheism (Israel) and thus will revisit both notions (/ these two notions?), through the analysis of strategies of naming and bynaming the gods. Great attention will be paid to time and space variations, which will contribute to innovations in the cartography and the web mapping of divine onomastic sequences.

An exhaustive database at the heart of the project

The MAP project aims at collecting all divine onomastic sequences in inscriptions and papyri, but also in a selection of literary sources. They will be registered in an open access database, available through the HUMA-NUM platform. This database will also provide abundant metadata relating to (ritual) contexts and (social) agents and thus allow numerous requests. Data registered in the database will then be analysed through statistic, cartographic and wep mapping tools. 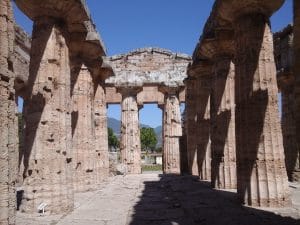 The MAP project intends to organise a wide panel of scientific activities: seminars, workshops, conferences, publications, trainings for junior researchers, dissemination for a larger audience… These events will be organised far beyond Toulouse, thanks to several national and international partnerships.

Through the analysis of divine onomastic systems, the religious field will be explored as a space of variable experimentation in which human action is moved by strategies, between norms and inventivity (creativity). If one can consider the whole system of divine appellatives as a language, MAP will give access to the mapping, modes of representation of the divine, as well as to the strategies of communication between man and gods.